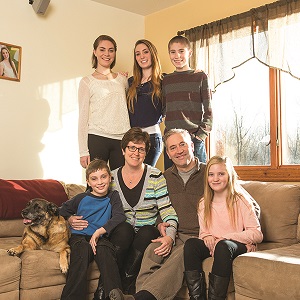 For Bill and Theresa Martin, Catholic schools are a dynamic partner in their parenting journey – helping them raise smart, well-rounded and faith-filled kids.

The parents of Kelly, Rachel, Sam, Lucy and Alex, make Catholic schools a financial priority and believe the tuition is well worth it.

“If it’s that important to you, you’re not going to really put a price on it,” Theresa says.

Bill says, “You only get one chance to do it right with your kids and I would hate to look back and wish I had done it differently.”

In order to afford a Catholic education for their five children – two currently in Catholic elementary, one in Catholic middle school, one in Catholic high school and one at a small Catholic college – Theresa and Bill, who runs his family’s steel business with his parents, rely on a mix of hard work and God's grace.

When the kids were little, Theresa worked from home part-time doing the office work for Bill’s business, and worked at the school on recess duty and as lunch parent to help with tuition. Now she goes into Bill’s company office part-time, and is also working part-time as an assistant in the St. Mary pre-kindergarten program to offset some of the costs.

“I know everyone’s situation is different, but if you just go and talk to the school, in our experience, they are usually really willing to work with you. Just don’t say right off the top ‘we can’t afford it,’ without at least finding out, talking with the school, going in and asking some questions.” Theresa recommends.

Read more about how Bill and Theresa make Catholic education a priority here.