Congratulations to the Cougars! 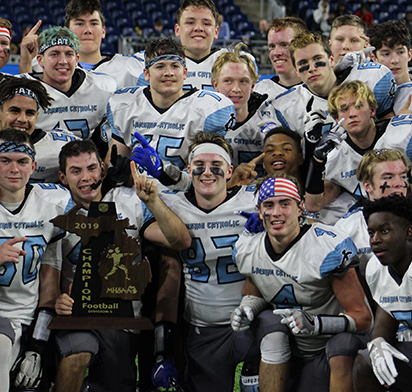 Lansing Catholic High School celebrated their first State Championship Football title since 1985 after a 31-17 win over Almont High in the Division 5 championship game at Ford Field in Detroit on Saturday, November 30.

“Well done to Lansing Catholic Cougars for not only winning but winning in a way that displayed great Christian virtue on the field and off the field,” said Bishop Earl Boyea of Lansing, December 2.

“Similarly, I would like to express my admiration for Jackson Lumen Christi who showed great dignity in defeat to Pewamo-Westphalia in the Division 7 championship game.”

“The young sportsmen of both Lumen Christi and Lansing Catholic gave great witness to the Catholic Faith that inspires all that our diocesan schools do in all aspects of the curriculum, including excellence on the sporting field.”

The Diocese of Lansing contains 28 parish elementary schools and four regional high schools. Each Catholic school attempts to assist parents in helping their children to grow in knowledge, wisdom and virtue so that our young people develop into adults who are both happy and holy as they fulfill their God-given potential.

* Footage courtesy of MLive at https://www.youtube.com/channel/UClmFQfVyDvdtCralM-Oo_mw