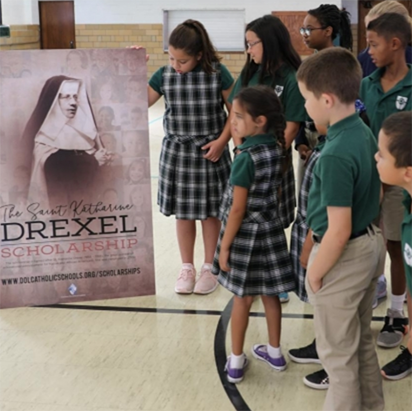 The Diocese of Lansing has launched two new scholarships aimed at boosting the number of minority staff and students in Catholic schools.

“As a Church, we need to reach out more effectively to Catholic minority students in terms of enrollment and retention, and we need more Catholic minority faculty and staff – I very much believe these new scholarships will help us achieve that,” said Bishop Earl Boyea of Lansing, 11 October.

Meanwhile, the St. Katharine Drexel Scholarship is aimed at increasing the number of Catholic minority teachers.  It will help with tuition costs for Catholic persons of color who wish to transition into teaching within a Catholic school via the State of Michigan’s Teachers of Tomorrow program. Its patroness will be St. Katharine Drexel (1858 – 1955), the great pioneer of educational advancement for Native Americans and African Americans.

“The parallel lives and saintly legacy of Father Tolton and Mother Drexel provide a timely reminder that a common humanity and shared faith in Jesus Christ unites Catholics of all ethnicities in a way that should foster ever greater unity while also respecting, indeed celebrating, diversity,” said Bishop Boyea.

“They also us remind us of the Church’s long and venerable tradition of conferring pastoral solicitude upon particular ethnic and racial communities.”

These two new scholarships are in addition to an already existing Diocesan scholarship program for Latino Catholic students which presently operates only in the Lansing and Flint areas but which the Diocese of Lansing now aspires to make diocese-wide.

Bishop Boyea made his announcement during an in-service day for over 500 Catholic teachers from across the Diocese of Lansing gathered at Lansing Catholic High School for a morning and afternoon of training on “Building Intercultural Competence”.

Also endorsing the new scholarships today was the Chair of the Diocese of Lansing Task Force on Race and Catholic Schools, Dr. Joan Jackson Johnson.

“This is an exciting time for me,” said Dr. Johnson, “the blessing of these scholarships is that, hopefully, it will raise the number of minority students in our schools – they are in our parishes, but families simply have a challenge sometimes in getting those dollars to get their kids into school.”

That sentiment was echoed by Elaine Jones, an African-American single-mother from Lansing who sends her 15-year-old son, Isiah, to Lansing Catholic High School thanks to tuition assistance already available from the Diocese of Lansing and support from her local Catholic parish.

“I always wanted him to go to the Catholic high school” said Elaine, “but it’s a financial burden and I think that if I didn’t have help, he wouldn’t be going to that school – so this new scholarship will benefit a lot, it will be a lot of help.”

Also present was Luz Fell, a native of Columbia who has taught Spanish at Lansing Catholic High School since 2000. She welcomed the offer of financial support for Catholic persons of color who wish to transition mid-career into teaching.

“I think the bishop has had a great idea in creating this scholarship because it gives an opportunity to those who once thought about being a teacher but haven’t done it yet, to do it now,” said Luz.

The creation of the new scholarships is just two responses to a total of 10 recommendations submitted by the Diocese of Lansing Task Force on Race and Catholic Schools to Bishop Boyea in spring this year. The creation of the task force in March 2018 came in the wake of national publicity surrounding the decision by some student football players at Lansing Catholic High School to kneel during the playing of the National Anthem.

“While the immediate cause of the task force was an honest disagreement between many people of good-will,” said Bishop Boyea, “my deeper concern was to help us determine how better to accompany our minority students in our schools so that their human, intellectual, and spiritual formation may be as enriching as possible – I think the task force recommendations have already helped us to move towards that goal.”

* Bishop Boyea's letter prefacing the response to the to the Diocese of Lansing Task Force on Race and Catholic Schools can be viewed or dowloaded here: Bishop Boyea Letter, 11 October 2019