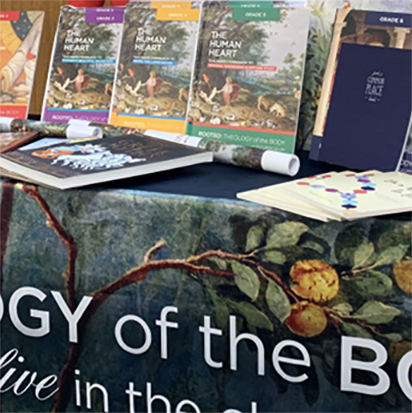 Pope St. John Paul II’s teachings on the dignity of the human person, including the truth of human sexuality, is becoming increasingly pivotal to the curriculum of Catholic schools within the Diocese of Lansing.

“That compendium of papal teaching known as “Theology of the Body” was borne of the genius of St. John Paul the Great in the 20th century and should now instruct, guide and permeate all that we do in our Catholic schools in the 21st century,” said Tom Maloney, Superintendent of Catholic Schools for the Diocese of Lansing, 14 November.

Maloney’s comments came during a one-day meeting of principals from across the diocese’s 32 schools being held at the Diocesan Offices in Lansing. During the day, those present were presented with new curriculum materials on the Theology of the Body created by Ruah Woods Press, a Theology of the Body education center located in Cincinnati, Ohio.

“Our materials provide a beautiful vision of the dignity of the human person as told through our Kindergarten through Grade 12 Theology of the Body curriculum,” said Laura Strietmann, Curriculum Consultant with Ruah Woods.

“It is a beautiful curriculum that is supplemental, so it’s really accommodating to schools who implement it as they don’t have to stop teaching what they are already teaching but can, instead, merely supplement what they are doing with our materials.”

The new Ruah Woods K to Grade 12 curriculum, entitled “Rooted”, received its imprimatur – official episcopal approval – this month and is already being taught in 40 states across the US.

“I am hoping that our principals are inspired, informed and motivated by what they have heard today and will take this Theology of the Body curriculum back to their schools,” said Tom Maloney.

Theology of the Body is the popular term given to a collection of 129 general audiences given by Pope St. John Paul II from 1979-84 at the beginning of his pontificate. The late Holy Father referred to the catechesis as an “adequate anthropology, which seeks to understand and interpret man in what is essentially human”.

Pope St. John Paul II treats several main themes in his work, including love, gender, self-gift, vocation, creation, redemption, purity, covenant, Sacrament and the relevance and dignity of the body. Although commonly thought of as a manual of sexual morality, Theology of the Body aims to touch the deepest roots of being human – exploring the intrinsic relationships, to God and to others, for which we were each created.

To find out more go to: https://www.ruahwoodspress.com/